I swear, I have been making things. Okay, it’s been slow (tendonitis still recovering), and I’m busy now with The Great Cello Experiment. And this time of year drains away all my spoons so by the middle of March I’m wishing I could just stay in bed all day…

Right after I finished that baby blanket, I moved on to another round of dishtowels. The same ones, it turns out, I did exactly one year ago. Except, in light of my Yarn Shrinkage Research, I decided I wanted them to be a bit wider once the cotton was done shrinking so they were a bit more useful. (I will write about the shrinkage thing in another post, but essentially, it takes 8-10 washings/dryings to get to the maximum shrinkage.) So, I added two inches, which meant adding 60 more yarns across. The resulting warp consists of 660 yarns across 22″.

I can hear all you non-weavers out there falling out of your chair and thudding to the ground. Yes, that’s 30 ends to the inch. If you’re wearing jeans right now, I can promise you that that cloth is 55-64 ends per inch. Which can absolutely be woven by hand using the tools I use right now, it just takes a little longer than weaving dishtowels because the yarns are thinner and there are more of them. Weaving is always a test in patience. Nothing about it is quick.

So, of course my plan was, two weekends ago, to get the warp measured, pre-sleyed, and beamed by the end of the weekend so I’d have mornings and evening to throw the shuttle. Did this work? It did not. Sigh. I decided during the course of winding the warp onto the back beam that the paper I was feeding in between the layers, though wrinkling at an increasingly alarming rate as it rolled on, would be fiiiine. That Monday morning at 3am, I awoke with the realization that this would change the yarn tension going on and then coming off the beam, and that I should unroll it and do it again. Ugh. But you know, you only have to do it right once.

So, I unwound 4 or so yards and spent the week’s mornings and evenings rewinding. In between, I read This is Your Brain on Music by Daniel Levitin, and I practiced scales and études. 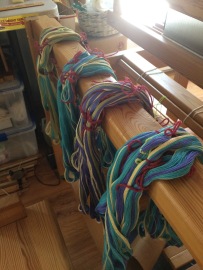 Laying the warp bundles out in order 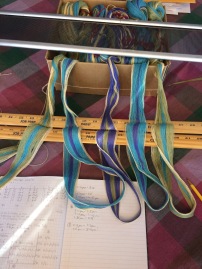 So much yarn. So much. 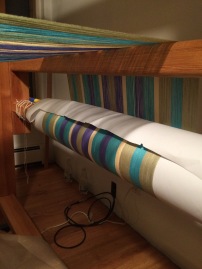 I left out pictures of the ReWinding, because that was slightly traumatic. There were some tangles due to uneven tension, both in myself and in the warp.

Someone asked me the other day why I put paper in between the layers on the beam. This is to prevent the top layers from cutting into the layers of yarn below them during and after the winding. Without the paper, the even tension when winding on would become very uneven very quickly. Some weavers use sticks to separate the warp layers, some use lengths of bamboo window shades. I have tried the sticks, but I prefer paper because it is easier to deal with and quieter coming off the beam.

And now, a random interlude.

At my day job, I’ve been trying to go for a walk during my lunch break because try as I might, I cannot burn calories throwing a 3 oz shuttle or leaning on a 3 oz bow. I visited a well-known spot in town:

It’s always entertaining to see what her fans deem worthy gifts. I’ll go burn some more calories today and check again. Stay tuned for an update in a later post.

Right. So, with the warp now successfully on, I managed to thread all 660 heddles, sley the reed, lash the warp on, and start throwing the shuttle. Whew!

The first leg of The End: 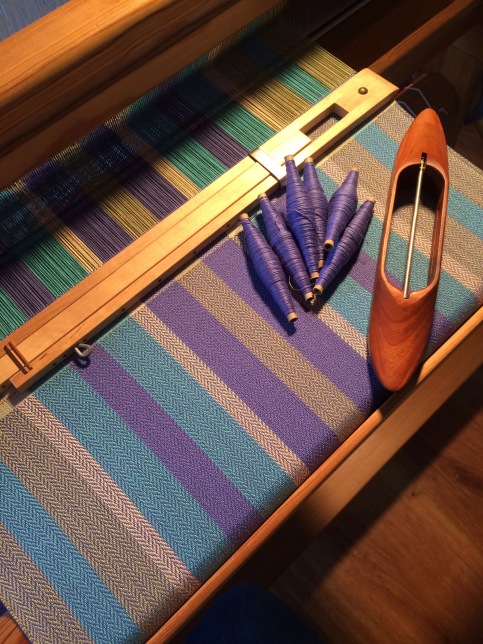 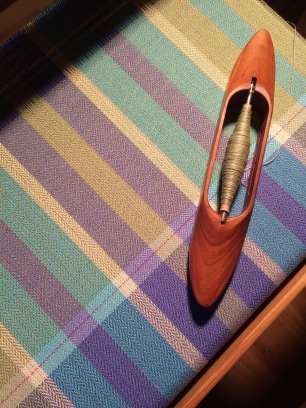 Once again, you can see the color change due to weft color choice. Above is how I left things this morning – I finished up the second purple weft towel, and began the first green weft towel. The plan is to weave eight towels (nine, if I have enough warp, which I should have), two with each of the four colors: purple, green, yellow, turquoise, and then an additional yellow one. Probably.

People always ask me how long it takes to weave. Like, all the time. The answer is: it depends. On the project, on the yarn, on the pattern. Probably it takes longer than you think? For this particular project, to measure the warp, get it wound onto the back beam, get all the heddles threaded, get the reed sleyed, lash on the warp at the front, and then start throwing the shuttle – provided there are no mistakes – for me with this loom, it takes about 12-15 hours. I’ve timed myself throwing the shuttle for one towel, and including advancing the warp, backing up to fix mistakes, winding new quills, etc, it takes me 1.5-2 hours per towel. So, for this warp, I anticipate it taking an additional 14 hours this week until I can cut the cloth off the loom. (EDIT: with practice, once I get up to speed, it looks like I can weave a towel in 1.25 hours.)

(If you are a weaver, I would really like to know how long it would take you to complete a similar project!)

What I marvel at so often is that the clothes we wear today evolved from women’s work creating cloth, both by means of weaving and by means of knitting. The technology hasn’t really changed – the fundamental structure of cloth demands the same process to build it – it’s just faster now.

Once this project is done, I have some really lovely fine wool yarn I want to dye and weave. Still. Unless I decide to measure out a warp for upholstery.