I did not know there were going to be house guests, but breakfast out was really nice! We went to a local café on a farm down the road from us. The building is a strawbale construction, a simple design, with rustic decor. The food is tasty and plentiful. And the owners know my friends (of course). During the course of chatting with the owners, I happened to look out one of the side windows and noticed a walnut tree laden with nuts, so at an appropriate moment in the conversation, I changed topics and asked about their tree. Would it be possible to collect some of the walnuts I had seen on the ground? I wanted to make a dye. Of course! was the answer. The one tree I had seen turned out to be part of four trees. I was given a small paper bag and after we’d finished, I went outside and around the corner to the walnuts. And lo! there I saw so many walnuts. In fact, I’d never seen so many walnuts, and I wanted all of them. However, not knowing how many I’d actually need to making dye, I happily filled my paper bag and asked if I could come back if I needed more. The owners were more than happy to oblige. I can come get as many as I like. Woohoo!

(Sadly, I did not get a picture of the trees.) 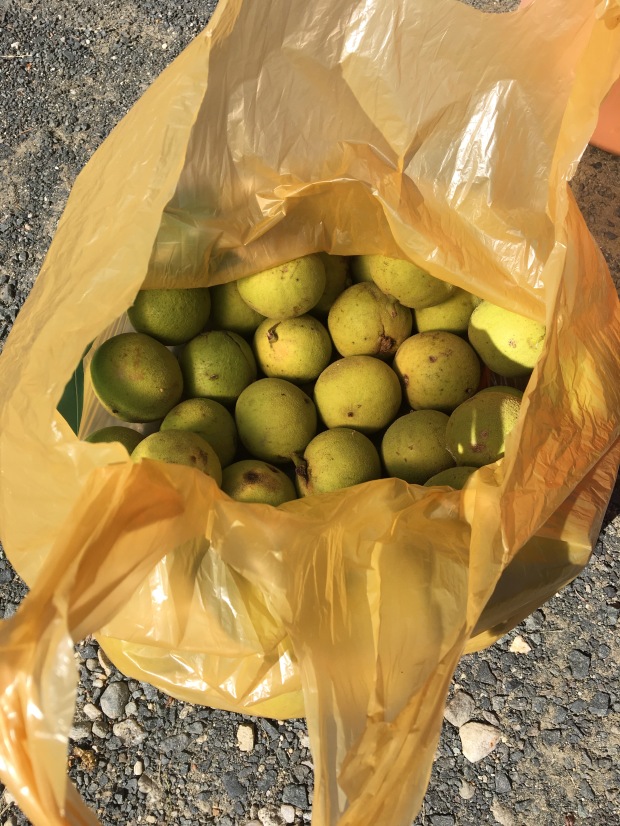 I counted them – about 60. But I had to toss a few that ended up being full of worms.

I must say, black walnuts smell delightful. The hulls have a sort of earthy citrusy fragrance that makes me so happy. I can’t quite adequately explain it.

The hulls will also stain your hands brown like crazy. We got home, and I put the rest of my day’s plans aside for a few hours so I could peel the hulls from the nuts – the hulls are used for making dye. The shells are too, but if I’m going to use the shells, I want to save the nutmeats, so I spent time separating everything into two buckets. 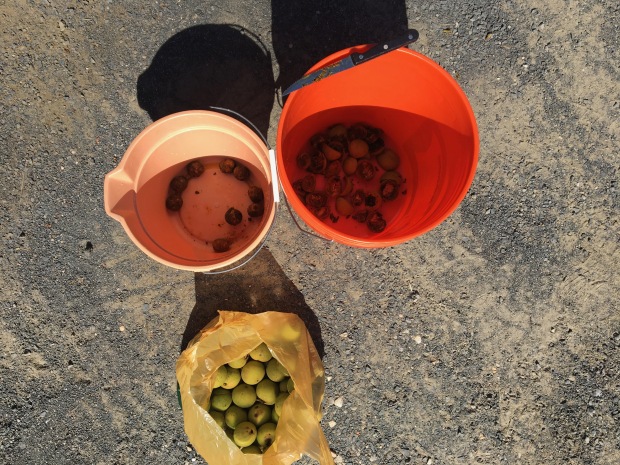 Nuts in the left bucket. Hulls in the right. Unexpected fun with walnuts!

Most of the instructions I found online made it seem like getting the nut out of the hull was really hard and that I needed to drive over them, whack them with the claw of a hammer, or find a mallet and whack them until they yielded the nut. None of that was necessary. I got a steak knife and just ran the blade around each walnut, neatly dividing the hull into two hemispheres. Then a twist released one hemisphere, and if it didn’t, then one more cut to divide a hemisphere in two did the trick. It was a bit reminiscent of pitting all those peaches I canned a while ago.

So, the staining. Because black walnut hulls have so much tannin in them, they stain things pretty permanently – the tannin is the mordant. Cloth, skin, any natural fiber…brown. All the sources I found online told me to wear heavy rubber gloves. I didn’t have any, but I did have some disposable food service gloves at hand. 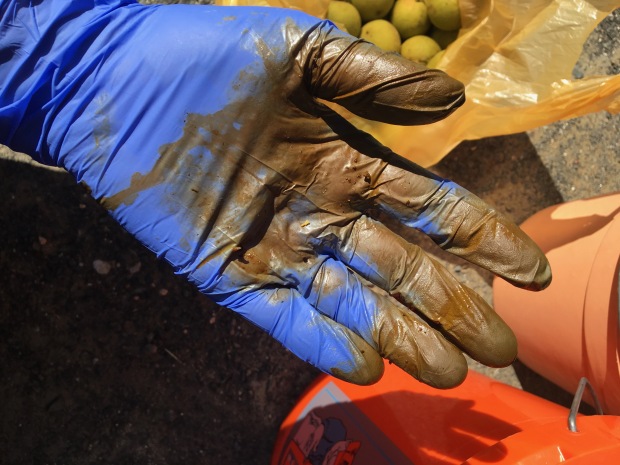 Yeah. So, all this brown? Still got through, and my forefinger and thumb are a bit brown.

I got them all hulled! But what to do with them then? Most instructions say to simmer them for an hour or so, but I do not want to have an accident in the house and stain the kitchen. It is not my kitchen after all. So, I’m trying what I think is a far more likely historical recipe (even though I have no proof at all): I’m soaking the hulls in that bucket in water for a couple of weeks. Then I’ll strain everything and maybe might see if I can find an outdoor cooking arrangement so I can simmer it and kill any mold that might have formed. Or not. Maybe I’ll put some in quart sized mason jars for later.

This dye is also apparently an excellent wood stain! I loves me a multitasking thing I can make! So, after a little experimentation with some wood scraps and some research, I may do any final prep and put some in jars for my woodworking friends. (And I am filing this knowledge away for later when I want to build bookcases for whatever house I end up with!)

I’ve got a couple of white skeins of two ply yarn I’ve spun – one skein I really have to run through the wheel again to give it some extra twist. And I have so much more white (Down breeds blend) that could be dyed with local black walnut dye handmade by me. The dyeing process itself is apparently super easy. You simply put the yarn or cloth in the dye and leave it there until it’s brown. If simmering it, I think you simmer for something like 30 mins to 1 hour. I will likely try just soaking it for a day and see what happens. (I do have to look into some sort of outdoor cooking equipment, though…)

I was also thinking of dyeing some bamboo rayon yarn and/or cotton yarn for weaving cloth or towels or something. Because why not?

But, don’t you need more walnuts for dyeing all that stuff? I hear you ask. It turns out, everyone seems to agree that you only need 12-15 walnuts per gallon of water. For just the hulls. So I have 4 gallons of the stuff. That’s a LOT of dye. Even 2 gallons is a lot if some of the water is supposed to be lost in cooking it. I am planning on also getting the shells, which apparently yield a darker brown. (Of course, that may not work, but I will try.) 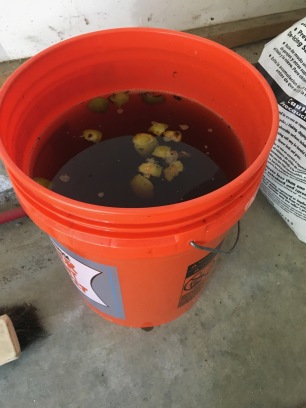 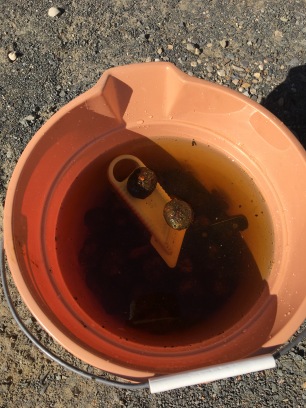 I filled up the bucket with the hulls with water. I’ve set it in the garage with a piece of wood on top to soak for a while. The bucket with the nuts got filled with water, and I started scrubbing the remaining hull gunk off. I had read that the gunk could rot and mold and make a mess, but most importantly, it would dye your hands dark brown. I don’t feel like walking around with dark brown hands and having to explain that I have been playing with dye everywhere I go, so I elected to scrub. The two floaters were thrown away – I suspect if they float, there’s probably a problem with them.

I got about half scrubbed before I ran out of time and energy. So I drained out the water, put a tiny bit in so the ones that were left were only barely covered, and set those in the garage too to wait until I have some time to resume scrubbing. I’m hoping the soak will help to soften up the remaining gunk.

The real work to this project is going to be actually cracking the nuts. A quick read about black walnuts online seems to show that I’ll need to use a vice as a regular nut cracker will not do it at all. Woo. 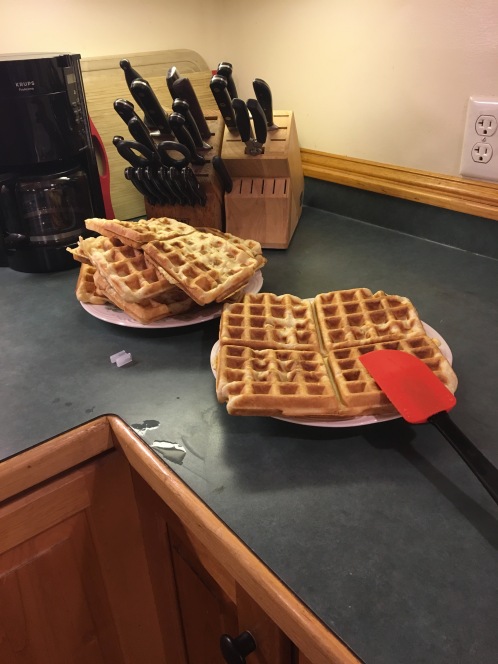 Excuse the messy counter – my first attempt at waffle production!

I thought I’d double the recipe, because ultimately, I wanted waffles in the freezer that could be toasted in the toaster for near-instant waffle goodness. But then I accidentally put in twice the amount of butter for a doubled recipe, which meant I either had to throw everything away and start over, or end up with a quadrupled recipe. I went for the quadrupaling.

We have a LOT of waffles in the freezer. The house guests tried the waffles the next morning in the toaster, and declared them delicious. Successful experiment! I think the recipe needs tweaking – it needs a little sugar, and the optional cornmeal actually sounds good, so I might try that. And they were a little dense, probably because I didn’t whisk the egg whites nearly has much as the recipe said I ought, so maybe I’ll try that next, but with some cream of tartar to help things along a bit. So many tweaks. Or I could try another recipe.

In weaving news, I have a crazy idea involving 60/2 silk and some very fine baby alpaca and an overshot pattern. First, I want to make myself something beautiful like a shawl or scarf, but it occurred to me that I could sell one, and the pricetag would be fairly high – this would be a very time-consuming project with excellent and expensive materials. The bulk of the cost would reflect the labor involved. I wonder if I could sell one or two (or three?), because then I could buy a cello. It looks like that experiment has been successful enough that I’m close to outgrowing the cello I rent. Do you guys have any thoughts on this? Advice? Suggestions? Is this an idea worth pursuing?

(I can rent a viola da gamba, it turns out, and it is affordable. I kind of hope that I don’t love it as much as I think I will, because there are almost not enough hours in the day for adequate practice…)