May was a very busy month. One of the highlights was a trip to Balky Farm in Northfield, MA to watch the sheep shearing and get first dibs on the freshly shorn fleeces. Last year, the weather was perfect: blue skies, a gentle breeze, birds chirping, a warm spring sun…this year, it was freezing cold, very windy, and flurried for most of the day. The few of us from our spinning group who showed up huddled in the barn out of the wind, but did go back to sit in the car to thaw every couple of hours.

If things hadn’t been so restricted by the coronavirus, we would have planned to bring a few thermoses of hot drinks to pass around. Alas!

The barn is large and spacious. On shearing day, some portable gates were set up to hold the sheep. 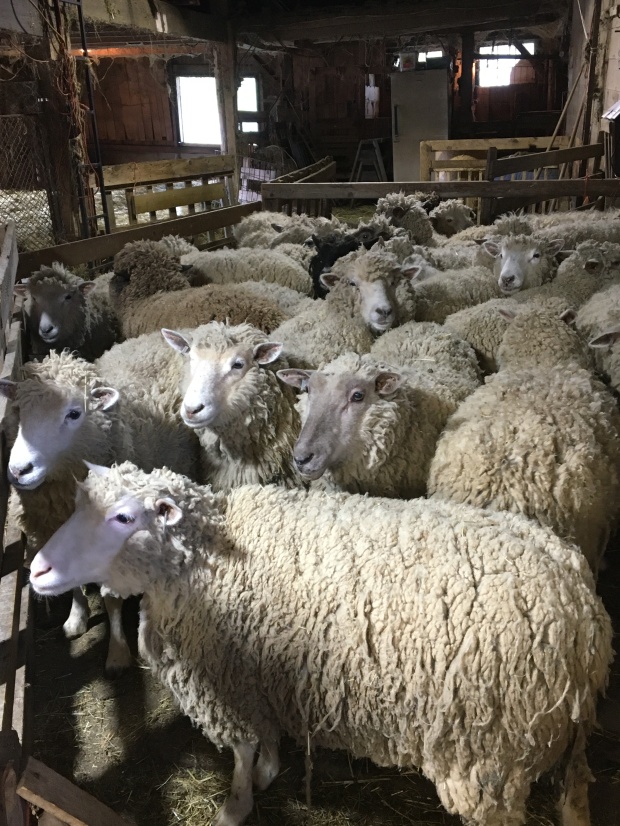 Then the shearers – there were three of them – would ask for another sheep, and a farm hand would let one out. The shearer would carefully lead the sheep to the shearing platform and kind of wrangle it over onto its side and then its back, keeping the head up. I have heard that you can’t keep a sheep on its back for too long because its insides get rearranged in a really awful way for the sheep later. So, the shearer has to be careful to work quickly when starting as the first cuts are at the belly. When the belly wool has been shorn, the sheep is moved to her side and shearing continues there. 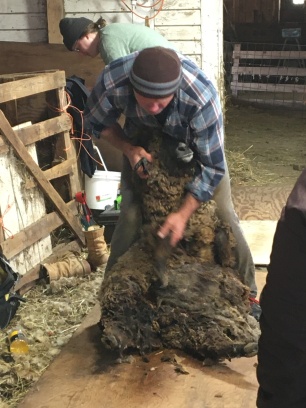 On the right is Kevin Ford, an international sheep shearing champion (though I do not know what prizes he has won), shears his sheep with hand shears. No electricity, no motors, nothing to freak the sheep out. Everyone stays calm. The two shearers on the left are Kevin’s apprentices, and I’ve totally forgotten their names. (If someone knows, please let me know!) There were 60+ sheep this year to be shorn, and it was expected to take at least a couple of hours, but we were told the shearers arrived about 7:30ish and they didn’t leave until about 1pm.

However! Having arrived at the farm about 10am, we got to see plenty of sheep being shorn. And, maybe the best part, we got to see each fleece up close and personal immediately after it came off the sheep! 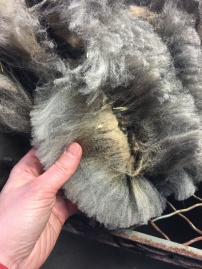 There were lots of white sheep, but also lots of colored sheep. And I have a thing for grey wool. I honestly do not remember if the two fleeces I bought are any of these in the picture, but they were all purchased. The breeds are all mixed, but mostly they’re Shetland/Finn with sometimes some obvious Cheviot or a touch of Romney. They’re SO soft.

This one just kept staring at me and chewing its cud. I felt so judged.

I ended up with a light grey (very like the one on the right in the picture above), and a dark grey, almost charcoal in spots. They’re both stunning, and I can’t wait to wash them and spin them up. There’s So. Much. Going. On. (I sometimes with there were an extra 6 hours in every day.)

Our haul. Our cars smelled luxurious on the way home.

These fleeces are not expensive. We tried to pay more for them, and hopefully, next year the shepherd, Stewart, will charge more. The fleeces he doesn’t sell to hand spinners he sends off to a mill on Prince Edward Island. There, the fleeces are scoured, carded, spun, and woven into blankets. I love this so very much. (Almost to the point where I want to set up a mill to do the same thing here in New England. Anyone got some money they want to invest? Oh we have mills in the New England that will wash, card, and spin, but none that also weave.)

When I got home, I really couldn’t wait, so I washed up a few small handfuls I picked from various spots on the lighter grey fleece I bought. I wanted to see if there was a lot of variation. And, well, I just wanted to spin up some samples.