It does not seem like I last posted only two weeks ago. It seems like maybe six weeks ago. Staying at home…working from home…not leaving the house…all this seems to be playing with my sense of time. Which might not be a bad thing? I like routine, to be sure, and schedules are important so that I actually get things done, so I am so grateful to be able to work from home. But not having the same routine I’ve had for years is making me pay more attention to the detail of the overall shape of my day. It’s interesting.

In any case, I’m still on the Bread Experiment. Guys, I have baked some really awful bread. The first couple loaves were okay. The third loaf was pretty good. The fourth loaf had holes so large, not even cheese stayed on. There was more empty space than bread in that one. The fifth loaf was so bad, I think I’ve eaten maybe two slices from it, and it’s still on the counter and no one else has touched it. (It’s going out for the birds tomorrow.) And then….!

Yesterday, after a few days of No Bread and Extreme Frustration at Baking, I decided to try again. I had mixed some leaven the night before and I left it until late morning to use any of it for a new loaf. This time, I replaced 50g of AP flour with some coarse ground rye, because…I dunno. I’ve heard that rye is good at promoting starter growth, it’s got good microbial stuff. So, okay. I thought maybe this would help my dough and the finished crumb. The result was a very, very wet dough, because, I suspect, the rye didn’t absorb as much moisture as the AP flour, and I didn’t know this would happen because I am a Bread Baking Newbie. I stretched and folded, but not really according to any set schedule, just as I thought of it. And when about 7:00pm rolled around, I decided it was time to bake it. I very gently folded and shaped the loaf. OMG so carefully and gently. And because it was so very soft, I put it in a Dutch oven and ended up having to snip the dough with shears rather than score it. A razor blade won’t even do it. This dough was so wet, I was pretty sure it wasn’t going to amount to an edible loaf at all. 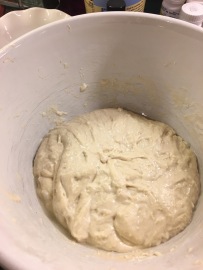 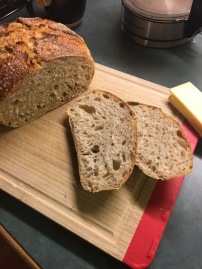 BEHOLD! Pretty liquid-like dough. And the resulting loaf was not at all what I had expected. This time, the holes are small enough to not let much Nutella or brie drip through!

I tell you, I was so surprised. My housemates have practically showered me with compliments. 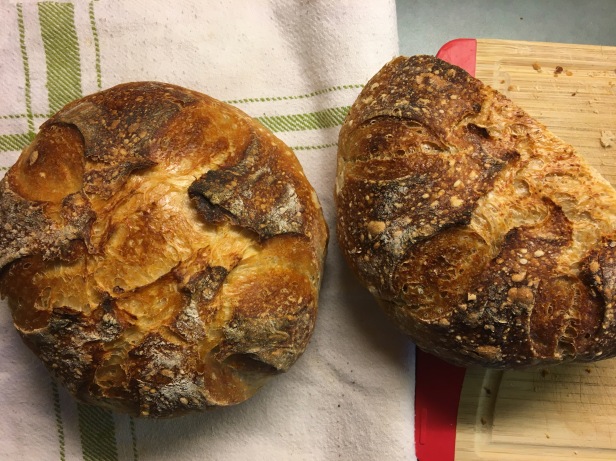 This is today’s loaf. So, because the last one was so wet and I have not been able to score any of the loaves properly even with a razor blade, I thought about adding more flour or reducing the water. For this one, I reduced the water by 50g, and boy was it dry. But this one was started last night with leaven I had started yesterday morning. I think I managed to stretch and fold once before bed (so. dry.), and then I just put it in the fridge until this morning. Miraculously, the dough was so much nicer and Not Dry. (Not sopping wet either, though.) Then, sometime this morning late, I started stretching and folding, again without any set schedule. I think there might have been an hour or so in between S&Fs, and after four times, I just stopped. About 4:30ish, I shaped it very gently, preheated the oven, and put it in the Dutch oven. Still unable to score it – argh! I wanted a firmer loaf so I could score it! Why is it not firm enough? – I snipped with kitchen shears and put it in to bake. Today’s loaf is on the left in the picture above, compared with yesterday’s loaf on the right. It’s a little lighter, but still looks gorgeous, doesn’t it? I suspect it’ll also be tangier due to the longer proofing time (overnight). The dough certainly smelled tangy when I put it in the oven.

The moral of the story is: neglected sourdough probably results in pretty good bread.

In other news, I am still spinning that grey fleece.

I plied those two bobbins I talked about last time. I have no idea how many yards I have – I still need to measure – but there’s a lot. I’m okay with how this turned out, except there’s a lot of energy in one of the skeins, which I think means I put too much twist in the singles. Sigh. Probably it’ll be fine, but the next two bobbins I’m spinning with slightly less twist in the hopes that the resulting yarn will be a bit fluffier – maybe not too fluffy because I want to weave with it. I think. (I’m not sure, to be honest. I’m mostly considering this fleece to be practice yarn. But we’ll see.)

The spinning guild is going up to the farm in Northfield where I got this fleece to get more fleeces in May, so I need to make ROOM.

I’ve been cooking, too! I don’t know why, but I wanted Spätzle so badly, and I wanted to share it with the house. I ate Käsespätzle so often when I lived in Germany. The noodles are available for basically pennies there, but the last time I looked, the same bag of noodles is sold here for $8 at the grocery store. The sad part is that it’s dead easy to make from scratch. SO EASY.

When I was in Germany last visiting my dear friends Eva and Martin, I asked Eva if she had a good recipe for Spätzle as I hadn’t made it before, and she ended up pressing a whole book of Spätzle recipes into my hands with the promise that I’d use it. I picked up a Spätzle press at the grocery store there, too.

Yup. So easy. So delicious. I cooked up a huge amount, and it was enjoyed by all. Of course, to be more authentic to my college days, I also opened a bottle of cheap red wine, and we all had a little with supper. (It was really awful wine – I mulled it later and it’s much improved as well as being without alcohol now. Woo!) Anyone who wants to know how to make Spätzle from scratch, let me know. I can send you a recipe, and if you’re nearby, we can get together and I’ll show you how it’s done (when we’re not all under quarantine, of course). These noodles were made with AP flour and duck eggs. I think I want to try it with a little semolina flour and put some fresh herbs in too. YUM.

And of course, I am making masks so that my housemates and I are as safe as we can be when we are out shopping for groceries. The New York Times had an article on which fabrics have been shown to be adequate. The suggestion was good quality quilter’s flannel and heavy quilting cotton. I chose batik – it’s a fairly high thread count, and it seemed to be the only cotton I had that (gulp, I hate to admit it) I felt I could sacrifice. (Yes, much of my cotton is earmarked for projects.) 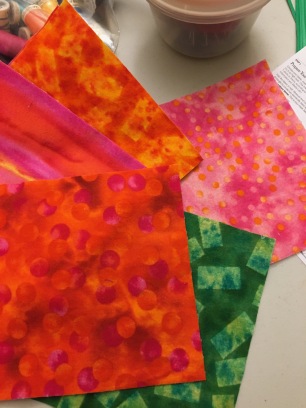 Flannel on the left, batik and some other quilter’s cotton on the right. 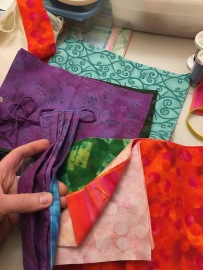 I haven’t quite finished them yet. I still have a couple with the swirly green fabric and blue flannel to sew up. I did cut elastic for them, but I’m thinking I’ll just make bias strips and make ties.

But I’m trying not to think about making masks and why too much right now. The news as well as the certain level of ignorance and not-critical thinking in people online right now have made me angry, so I’m trying hard to spend a little while concentrating on crafty stuff. Stuff that makes me happier. And Nutella. There’s not a lot that chocolate + hazelnuts cannot help.

I am prepared for so much bread in my life.

(I understand there are people who dislike hazelnuts and/or chocolate. I am not one of those people. Not even a little.)

How are you? What have you been making?