This past weekend was so full. (Except for sleep, alas.)

There was so much tea, snacks, wool combing, spinning, tidying, weaving, and washing wool. (And there were the usual weekend chores too.)

Here, have some pictures: 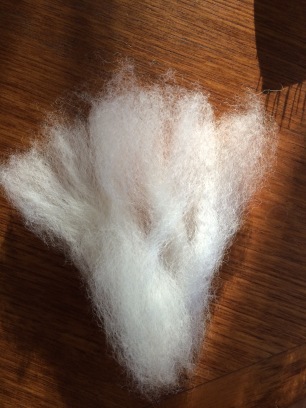 I may have mumbleboughtanotherfleecemumble….this one’s a North Country Cheviot, a breed I know nothing about, but this fleece is huge, so I’ll find out. So hey, learning! The wool is soft and very springy, and as you can see, very white. I washed a handful just to see what it was going to be like, then flicked a lock to see what that would be like. I think spinning this is going to be very different than spinning 420.

And speaking of 420, I gave in and slapped a fresh bobbin on the ole spinning wheel, and started spinning up some of those nests:

I got a little rambunctious there and didn’t move the yarn winding on, so it buckled a bit, but that’s okay. Both colors are from the same fleece, which I adore! I can’t wait to weave with this yarn – I think this might be like knitting socks with a variegated yarn in that you end up with a surprise in the final color pattern. So many more nests to spin! (So much fleece yet to comb!)

This is a diz. Homemade. I think this shell came from Long Island Sound, but it might have come from Maine. Or Nova Scotia. Totally unsure. In any case, I pretty much always have the odd shell around just in case I figure out something to do with them. I love shells, and have always thought that surely there must be some use for them! This one is now a diz. There was about 15 minutes of sanding on the top, then, wearing protective eyewear, I drilled three holes. I think I probably should have sanded the edges of the holes a bit more, but it works now.

After you’ve combed your wool into submission, and you’re ready to get it off the comb it’s on, the tool of choice is a diz. You can do this without a diz, but the diz makes things more even and consistent. You thread a bit of the wool through one of the holes in the diz, and then gently pull. The wool, naturally a bit sticky to itself, will draw off and bring other fibers with it, and you end up with a long snake-like piece of wool with all the fibers going in one direction, ready to spin. To store this, you wrap it around you hand a bunch of times and pull a loop near the other end through the middle. There’s a good tutorial for combing and making a nest here, though she doesn’t use a diz.

I also, at some point, went grocery shopping, and found a bag of mahogany clams that were calling out to me. I figured, hey, good food, and then a pile of shells with which to experiment and maybe make more dizzes. Or practice making dizzes. They were delicious, too.

And I finally got started on the next dishtowel project!

Next weekend, I’ll be driving up to Burlington, VT to visit a friend. I’ll try to bring the hat to work on. I’ll also try not to buy any fleeces, yarn, paint, ink, wood, tools…well, anything. I have FOUR bags full now and need to make some headway on that!