So, the weekend was busy. Really busy. Let me explain.

I’ve been toying with the idea of selling some of my handmade stuff. The “profits” (because, really, most people wouldn’t be able to afford my time beyond $5/hr, so we’re talking mostly cost of materials here) could go towards my hobbies, and if even marginally more successful than half of minimum wage, it could go towards helping me pay off my car loan and student loan. Weeeell, I can hope.

I also have some new brand (to me) of weaving yarn: UKI. A friend had told me about how it’s really the gold standard for mercerized cotton, so when an opportunity came up for me to get a cone or three without shipping costs, I decided to go for it and bought white, natural, a wonderful golden orange, and a nearly perfect red.

The goal of this past weekend’s adventures was to gather data for both figuring out if a profit were at all possible, and to see exactly how great this UKI yarn is. The first step for figuring out if profit is possible is to add up the total cost of materials used and time spent working with them in a given project. (The second step is to see if the market will bear the cost of your finished product, but I’m not there yet.) I already have receipts, so I needed to find out how long it takes me to complete a given project. Because there is a definite economy of scale in weaving, I broke it all down into steps.

The first block of steps involve measuring the warp, getting it on the loom, and then getting all the ends in order so you can start throwing the shuttle (what most people think of as “weaving”). This is a six yard warp, and I would say that the four yard warps took about the same amount of time – the difference was really only in the measuring and beaming (winding the warp onto the back beam while it’s under even tension). But two yards don’t make a huge amount of difference. Since this and the last three warps have required the same amount of heddles to thread (600), the time spent is about the same. If I were to beam a 12 yard warp, the only difference in time spent in this top block would be in actually measuring out and winding 6 extra yards.

Now I know I weave about 15″/hr as I’ve been keeping track over the last 12 towels. That’s 12 hours to weave half a dozen towels. (Which does not include hemming.) Already, you can see that about half of this project is spent getting the warp on the loom. But, in that delightful economy of scale, if I were to put a 12 yard warp on, and say that it only adds two more hours (for argument’s sake – there is a slightly faster way to measure the warp), then throwing the shuttle is up to 24 hours, but getting the warp on and ready is only 12 hours.*

Well. You can see that I think about this a lot. I’ve also been thinking about weaving rugs and wool or silk shawls because I think I’m more likely to get paid a better hourly wage than for dish towels. Though I do love weaving dish towels SO MUCH!

The really interesting thing about all this is yes, it’s a lot of work, but this is how cloth is still woven. Much is done by machinery now, but there are people who run the machinery, and make sure of dye lots, and make sure there are no mistakes, etc etc. And that cloth is later cut out to be sewn together into the clothes you’re wearing right now. This process of making cloth is at least 20,000 years old. Think about that for a moment. Twenty thousand years. TWENTY THOUSAND years. Not two thousand. Not ten thousand. One thousand years would even be famazing. We as a species have been clothing ourselves with fibers that human hands processed, twisted together, and woven (and we haven’t covered spinning yet, which is a whole other can of worms) in basically the same way I’m weaving towels.

The really, REALLY interesting thing is that because hardly anyone in the first world has been exposed to this process, it’s super easy for them to opt for bargain prices that, in the end, don’t actually pay the people involved in the manufacturing process what we in the first world would consider a living wage. (I need to find references for you guys.) All the time, I hear, “oh, I could never use that towel! It’s too nice!” And then they go to Walmart and spend $1.99 on a dishtowel that’s been made by the same process. I mean, I get that not everyone has $25 to spend on a single towel, but…this is getting into a different rant, so I’ll stop now and save it for another day.

Ahem. So. The other goal for this weekend’s weaving adventures was to see how this UKI yarn really weaves up. And I’m smitten. Compared to the yarn I had been using, this stuff is smoother, glossier, much tamer and less prone to tangling, and it weaves up so well! Also, weirdly, my selvedges seem neater. I’m pretty sure this is not due to all the practice I’ve been getting, but rather some quality of the yarn. I’ve woven two complete towels so far with UKI brand yarn wefts, and the third, which I started this morning, is with a previous brand weft. 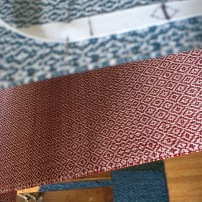 The red is the second towel using the UKI for weft

This is the third towel with a non-UKI weft

I’m REALLY happy with those edges. Really. I know they’ll shrink up and neaten even more once the cloth has been washed, so I’m less critical pre-wet finishing. In this case, I think the edges will look really professional post-wash. Exciting!

We’ll see how it washes and how it wears. I’ve got another few cones coming in the mail – they should arrive this week. I’m going to have to sell something to address the dip in my bank account… wish me luck!

*This is the amount of time it takes for me to work with my loom, which is old, slightly rickety, very much handmade, and has wooden ratchets and pawls. And no crank levers. Which means I wind the warp on by physically grabbing back beam and rolling it. One day, I’ll be able to buy a newer loom with metal ratchets and pawls, and lots of crank levers, which should speed things up considerably.