I’m definitely getting faster at this. Of course, having the “you’re going to get paid for this, make the client super happy” kind of fire under your butt is a pretty good motivator.

Friday morning before going to my day job:

I got this tied on and started throwing the shuttle Friday morning before work. Sigh – there are so many threading errors.

Friday night, I discovered a threading error. I did try to fix this by making a new string heddle, tying it on, cutting the misthreaded yarn, rethreading it properly, and tying it on to the web. About five shuttle throws in, I realized that I didn’t actually put the heddle on the right shaft. But, I reasoned, this is just a sample and the threading errors don’t actually mean anything. There are plenty of other errors. You are behind schedule anyway!

I continued to throw the shuttle.

Saturday morning, I got up at dark o’thirty and threw the shuttle: 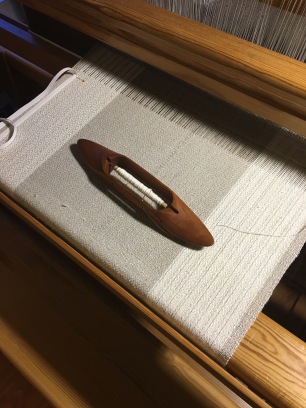 When I’d run out of warp, I cut the cloth off the loom, serged the edges, and took a lunch break. Then drove down to Webs for the cotton I needed for the omgUrgentProject!. (New cotton visible in the right hand picture.)

By Saturday late afternoon/early evening, I had started measuring:

Compared to the linen, this cotton is SO SOFT.

Sunday morning when the sun was finally up: 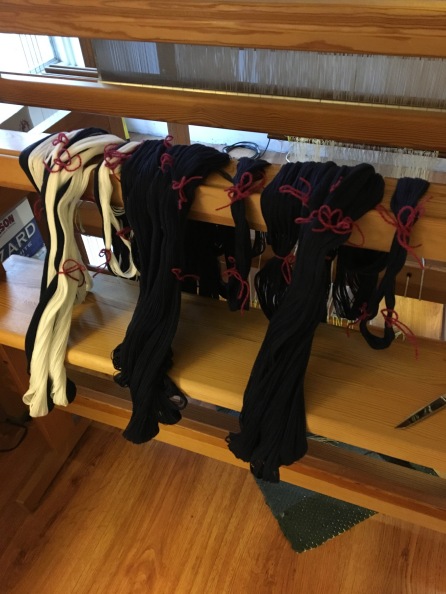 I was measuring the fourth bout when I took this picture.

I took a lunch break and started my weekly laundry, and when I was done winding on, then spent a couple of hours threading heddles. This project has 576 ends (yarns), and this step seems to be the longest.

I threw that linen sample in the wash and into the dryer to soften it up. It came out almost opposite of how it went in: stiff and something one would associate with a thin jute mat for the floor to limp, buttery soft, and almost silk-like in drape. It’s not quite what I envisioned it would be (not so fuzzy), but it will still be useful. After hemming, I will use the two pieces as dish or hand towels to see how they wear.

Around 3pm, I sat down to practice cello, and was back at the loom almost three hours later.

By Sunday evening about 8:30, I had completed threading heddles and had about 3″ worth of the warp in the reed, but had to get to bed.

By my own schedule, I’m still a day behind. I’m not sure I can catch up, but that isn’t going to stop me from trying. Last night, when I got home from work, I made a quick supper, and got to work: measure and put on a floating selvedge, add weights to the warp on the selvedges, start throwing the shuttle.

This part is super exciting, because throwing the shuttle is where you finally get to see the pattern happen, but also where you get to see if you made a threading or sleying error. Turns out, I made a sleying error. It was not too hard to fix, but it did cost me about 30 minutes.

I’m very pleased with how this is turning out. I had forgotten how lovely unmercerized cotton is – it’s soft and drapey and very forgiving in the selvedges in a way linen just isn’t. I’m hopeful that I’ll be able to get one towel woven every evening this week. That may be pushing it, but I have been able to weave a single towel in an hour and a half, and it’s good to have goals, right? I wanted to have all six (or nine, the whole warp) woven and hemmed in time to be mailed on Saturday afternoon, but I may have to wait until Tuesday morning. (Monday is a bank holiday.)