And it’s not the buzzword definition – I’m so busy with non-crafty stuff (and tired) that Teh Crafturgency! isn’t going at the speed or quantity one might otherwise expect from me. Alas.

Here’s some of what I have been doing.

I finished the pants – woo! and I managed to use all but about 8″ of the spool of matching thread for top stitching. They have been mailed to J. Behold my extreme luck:

This guy was in the backyard. There’s just so much wildlife back there! 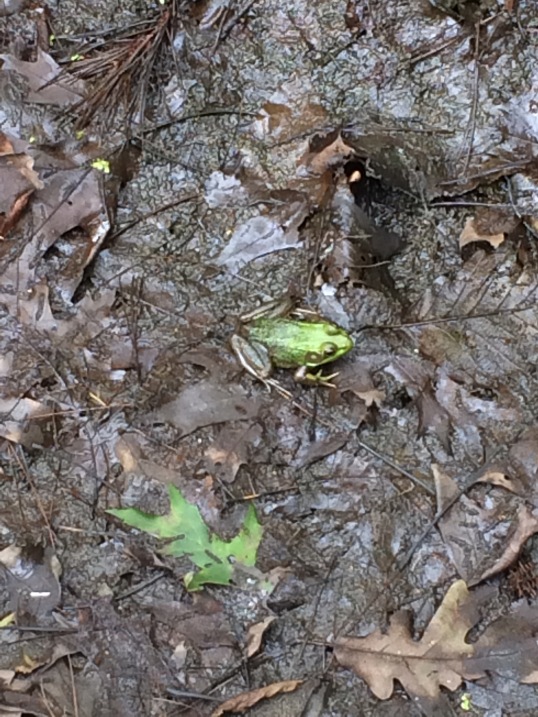 Froggie! He was so very beautiful, with gold eyes. And very quick. I couldn’t get any closer, so the resolution is dreadful.

I continue to be delighted by the bright colored flowers I find in downtown Amherst. The thistle is wild, the zinnia was planted by a landscaper. Aren’t they beautiful? 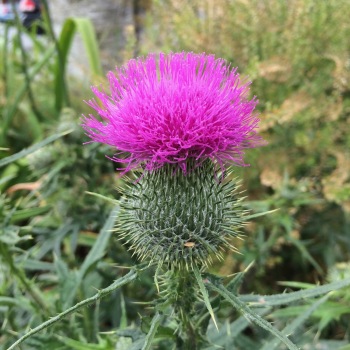 I went to the mineral, fossil, and gem show in Springfield this past weekend (largest on the east coast!) with my brother, his two daughters, and our friend M and his family. It was just too delightful for words! I got to see beautiful gemstones, uncut crystals, polished stones, pieces of petrified wood, pieces of mammoth tusk, all with my nieces. With my nieces!!! WOOHOO! Part of our adventure also included a trip to Michael’s for art supplies where we found some much needed things for art to happen at their house, and I found a bead reamer set. I had been thinking about buying a set of jeweler’s needle files, but have been feeling oddly cheap about it, so when I saw this reamer set for $5, I snapped it up. When I got home, I applied it to the shell I made into a diz to see if I could smooth out the holes a bit. I think it worked? I’ll have to test it later to see if the wool comes through with less of a struggle. I may end up with a jeweler’s file set anyway.

I fretted about what warp to measure next, and decided that I need to figure out the actual shrinkage (after many, many washes and trips through the dryer) between the two brands of cotton yarn I’ve been using because J tells me her bathmat has gotten irritatingly smaller (!!!!). AND, I realized I could get two functions out of these experimental warps. The red and white below (one brand) will become red and white dishtowels, a couple for Z in Indiana, and a couple for me. The next warp will be with the other brand of yarn: a couple for someone else, and a couple for me. Everything will be measured and photographed after every trip through the laundry. Then I will have completely useful and pretty presents AND experiment data. 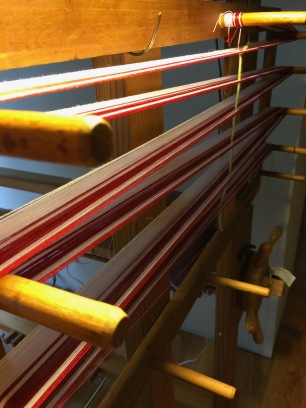 Yeah, I’m a crafty nerd. If I win the lottery, I will both set up a massive maker space for my little area and go back to university. Cross your fingers!

Once I get the warp on the loom (and that will be an adventure in itself), I’ll have to figure out how to tie up the lamms. TWO sets of lamms. Upper and lower. I will admit, I’m nervous about the whole thing, which makes no sense. It’s not like I can mess it up. It can take a lot longer if I don’t think about the steps properly, but that’s the worst that can happen. Probably.

I think this will be the draft I’ll use. I mean, I did figure out where to put stripes so they fall symmetrically down the pattern, but since that’s the first time I’ve tried that, there’s a chance I messed it up. I didn’t draw a draft, and I didn’t use any computer software. I used… arithmetic.

I’m a bookkeeper (among other things). I can totally add and subtract. Uh-huh. Honestly.

One thought on “Slow craftiness”