Currently, the obsession is weaving! Honestly, there’s no better feeling than starting out with basically string, and unwinding long lengths of beautiful cloth at the end.

Last year, I bought six cones of brightly colored 10/2 mercerized cotton with the intention of weaving my good friend Lee some OMGBRIGHTNESS for her kitchen. I came up with a plan for three warps using two colors each, and then the four remaining colors would be used as the weft. That way, I would end up using just about the same amount of yarn off each cone, I’d have fairly short warps, I’d end up with a dozen towels, and I’d certainly learn things along the way about color, beaming the warp (always need more practice), different threadings and treadlings… 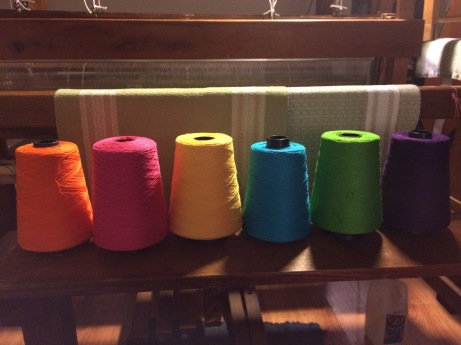 The Cones of Brightness!

And after several weeks (there were a few interruptions – you know, knitting just happens…you can’t control it), I ended up with these:

That’s nearly 10 1/2 yards of cloth total after washing. I’m beyond thrilled with how these turned out – I had no idea it would be this colorful. Actually, I’m not sure what I thought I’d end up with, just something not quite this magnificent. I learned a lot about color and beat and tie-ups, and I want desperately to weave several of these towels again because I love them so much!

Also, I’m really, really inspired to start saving the waste yarn (I think I read somewhere that they’re called ‘thrums’? I’m not sure…) and make paper! Oh yes. You’ve heard of ‘cotton rag’ and ‘linen rag’ in reference to types of paper? Those are actually made of cotton and linen rags. Isn’t that cool? You take cotton or linen (or both) scraps, cut or rip them up into very small pieces, put a bit in a blender with plenty of water (a blender you’re never going to use for food!), whiz it up until it’s a pulp, and now you have paper pulp.

But. I’m getting ahead of myself (as usual). When I actually make paper, you’ll be the first to know!